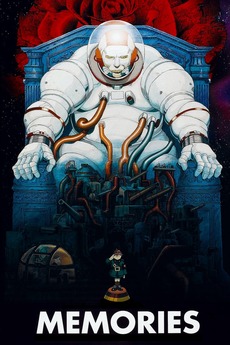 In this anime anthology, a salvage ship crew happens upon a haunted vessel in "Magnetic Rose"; a cold tablet turns a lab worker into a biological weapon in "Stink Bomb"; and an urban populace carries on an endless war with an unseen foe in "Cannon Fodder."