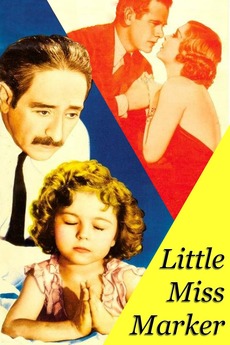 Big Steve Halloway, gambler and proprietor of New York's Horseshoe Cabaret, where his girl, Bangles Carson sings, is in desperate need of money. He arranges for his fellow bookies, especially Sorrowful Jones, to each pay him $1,000 for his racehorse, Dream Prince, to lose. With all bets being placed at the window, Sorrowful encounters a gambler, having lost $500, wanting to place his bet but is unable to come up with $20. Instead, he places his daughter, Marthy Jane (Shirley Temple), as security, or in bookie's terms, a "marker". Having lost his bet, he commits suicide, leaving "little Miss Marker" under the care of Sorrowful Jones. As Steve hides out in Chicago to avoid investigation for his crooked bets, he entrusts Sorrowful to watch over Bangles during his absence, at which time the "gold digger" helps "tight-wod" with his trouble. When Big Steve learns Bangles is involved with Sorrowful, he returns to New York to do something about it.

The Girl in Pawn