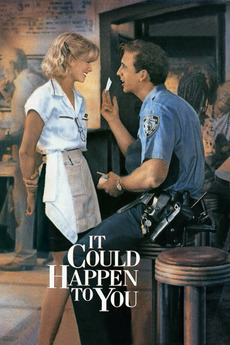 It Could Happen to You
JustWatch

It Could Happen to You

A cop. A waitress. A lottery ticket.

Charlie Lang is a simple, kindhearted New York City cop. When he realizes he has no money to tip waitress Yvonne Biasi, Lang offers her half the winnings of his lottery ticket. Amazingly, the ticket happens to be a winner, in the sum of $4 million. True to his word, Lang proceeds to share the prize money with Biasi, which infuriates his greedy wife, Muriel. Not content with the arrangement, Muriel begins scheming to take all the money.

C’mon, it didn’t hurt that bad. Just lookin’ at you hurts more