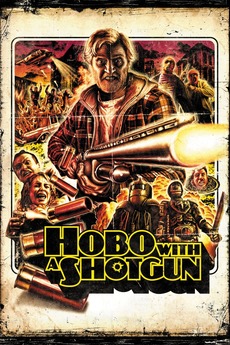 Hobo with a Shotgun
JustWatch

Hobo with a Shotgun

Delivering justice, one shell at a time...

A vigilante homeless man pulls into a new city and finds himself trapped in urban chaos, a city where crime rules and where the city's crime boss reigns. Seeing an urban landscape filled with armed robbers, corrupt cops, abused prostitutes and even a pedophile Santa, the Hobo goes about bringing justice to the city the best way he knows how - with a 20-gauge shotgun. Mayhem ensues when he tries to make things better for the future generation. Street justice will indeed prevail.