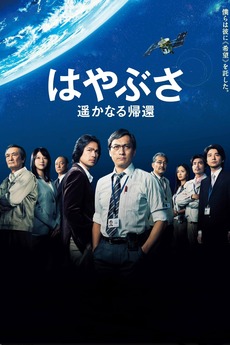 In May 2003, the Japan Aerospace Exploration Agency (or JAXA) launched an unmanned spacecraft of their own development to retrieve samples from an asteroid. Seven long years later, Hayabusa achieved its goal and was the first of any kind of craft launched from Earth to safely return samples of this kind to home base. The story was one of such great national pride for Japan, and in the wake of the tsunami and resulting tragedies in Japan it’s strong nationalistic message became the subject of no less than three rival films. Yukihiko Tsutsumi’s high-profile effort, simply titled Hayabusa (2011) starred the incomparable Toshiyuki Nishida. Most recently, Welcome Home, Hayabusa (2012) was released to Japanese audiences. Slipping in between those two was Hayabusa: The Long Voyage Home, concentrating on the people on the ground who helped return the probe safely.