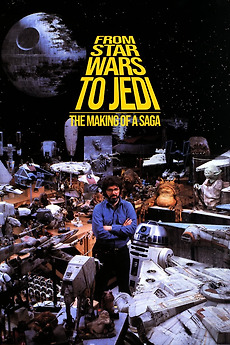 From 'Star Wars' to 'Jedi' : The Making…
JustWatch

From Star Wars to Jedi: The Making of a Saga is a 1983 television documentary special that originally aired on PBS. It is a behind-the-scenes look at the making of the original Star Wars trilogy, with particular emphasis on the final film, Return of the Jedi. Narrated by actor Mark Hamill, the documentary was written by Richard Schickel who had written the previous television documentaries The Making of Star Wars (1977) and SP FX: The Empire Strikes Back (1980).

From Star Wars to Jedi - The Making of a Saga

The Skywalker Saga is what started it all. Sure, they started in the middle of the story, worked their way…