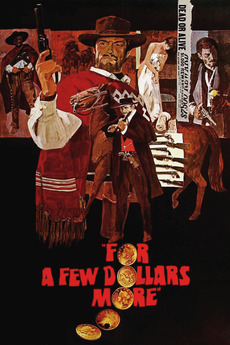 For a Few Dollars More
JustWatch

1965 ‘Per qualche dollaro in più’ Directed by Sergio Leone

The man with no name is back... the man in black is waiting... a walking arsenal - he uncoils, strikes and kills!

Two bounty hunters are in pursuit of "El Indio," one of the most wanted fugitives in the western territories, and his gang.