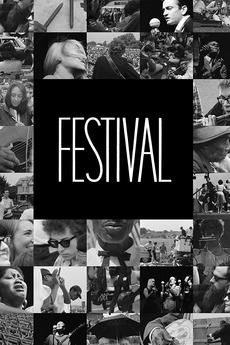 Newport is an oasis of beautiful music - and beautiful people ... who take the high road to

Black and white footage of performances, interviews, and conversations at the Newport Folk Festival, from 1963 to 1966. The headliners are Peter, Paul and Mary, Joan Baez, Pete Seeger, and Bob Dylan, who's acoustic and electric. Son House and Mike Bloomfield talk about the blues; John Hurt, Howlin' Wolf, and Sonny Terry and Brownie McGhee show its range. The Osborne Brothers perform bluegrass. Donovan, Johnny Cash, Judy Collins, Mimi and Dick Farina, and others less well known also perform. Several talk musical philosophy, and there's a running commentary about the nature and appeal of folk music. The crowd looks clean cut.