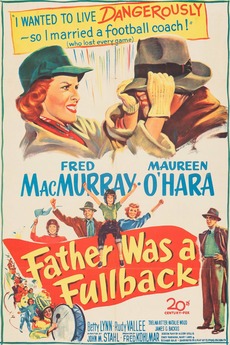 Father Was a Fullback
JustWatch

Father Was a Fullback

I WANTED TO LIVE DANGEROUSLY ~ so I married a football coach!

Coach George Copper's college football team is losing game after game, much to the dismay of stiff-and-stuffy but influential alumni Roger Jessup, and also having trouble at home with his oldest daughter, Connie. The team keeps losing and Coach Cooper is about to lose his job as his efforts to win the last game of the season, against the team's Big Rival, end in disaster. But, unknown to he and his wife, Elizabeth, Connie has sold an article, called "I Was a Bubble Dancer" to a 'True-Confession" magazine, and the girl-who-couldn't-get-a-date becomes suddenly popular and, because of her, the high-school football star from another town decides to play his college-ball for Coach Cooper. Jessup is forced to keep Cooper on as the school's football coach.

open ended obscurantist erotology of film history. no ranking, adding stuff as i move along.