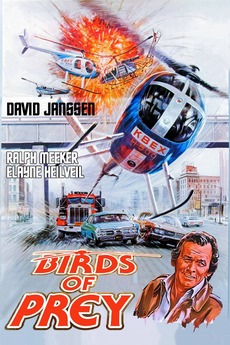 1973 Directed by William A. Graham

Before Blue Thunder, There Was ... Birds of Prey

Harry Walker, a former military pilot, works as a helicopter pilot and traffic reporter for a Salt Lake City radio station. One day while working he observes a bank robbery in progress and the kidnapping of a young woman who worked at the bank. Harry goes into pursuit which leads to an exciting conclusion.

In an attempt to balance out the stigma against TV movies, the most worthwhile have been mined from your vague…

The book "Are you in the House Alone", edited by Amanda Reyes, is 330 pages chock full of television movie…

Movies removed with no warning. Thanks Amazon... hopefully they return..

Good Movies With Less Than 400 Views

Doppelgänger! Movies with the Same Titles as the crap you like!