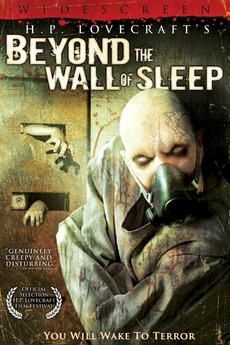 Beyond the Wall of Sleep
JustWatch

Beyond the Wall of Sleep

Joe Slaader is a mysterious mountain man being held in the Ulster County Asylum after the brutal murder of his family. Edward Eischel, a young intern, sees something more than just an inbred monster in this new inmate, however. Instead, he sees him as the harbinger of some greater and much darker force. With bodies piling up, his job in jeopardy, and his sanity hanging in the balance he gives in to his obsession with tapping into Joe's hidden power, risking all that he has along the way.

I haven't seen all of these, so if you think something doesn't qualify, feel free to…

Films I Own But Haven't Seen

These are the films I've amassed in my hoarding-levels of collecting movies. As I watch them, I'll delete them as…

Films adapted from H.P. Lovecraft stories. The story titles are in the notes. Some of these films may be very…

Designed to inspire Call of Cthulhu and Delta Green scenarios, I cast a pretty broad net.

The title comes from…