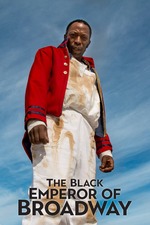 In 1921, Eugene O'Neill rejects the use of blackface and casts African American actor Charles Gilpin in the lead of his groundbreaking play "Emperor Jones".

Directed by Arthur Egeli, The Black Emperor of Broadway delivers a strong performance by Shaun Parkes. The screenplay, penned by Ian Bowater, gives off the feeling of a PBS Masterpiece Theatre feature. Whether you think it's a good thing or a bad thing, it just feels like it belongs on PBS. Shaun Parkes was the standout in the film. The rest of the cast was alright.