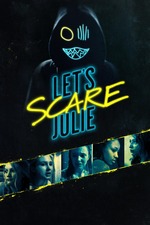 Nope. Just nope. Why in the blue hell does this piece of cinematic catastrophe bears a similar title to the classic Let's Scare Jessica to Death? Let's Bore Julie to Death would've been the more fitting title for this literal pitch black marvel of nothingness. This mini budget, almost entirely one location setting, and most certainly ad-libbed one-shot horror outing from writer-director Jud Cremata tests real time gimmick from necessary to superfluous execution all the way through. At times also feeling like a near parody mix between The Taking of Deborah Logan and Unfriended yet forsaking their purposeful use of found-footage conventions in favor of the invisible cameraman, for better or worse. Because the one-shot gimmick is really the only thing it's going for it, even if the execution takes a sloppy turn just as the story suddenly annihilates everything that's initially interesting about it. So let's dig further; the premise of Let's Scare Julie details the excruciating plan of a group of insensitive, low-key gay prankster girls who try to ambush the house next door and terrify the bejeezus out of them on such a dark and rainy night to boot.

As it's with the case of teen horror movies, the prank plan backfired and things start to go south when only one of them manage to come back and meet up with one of their friends, the stock final girl character with an obligatory haunted past, inexplicably mumbling about "masked men" and their neighbor looking not entirely human during the nightly visit. Now, while the premise is somewhat interesting and should warrant an eye or two along its way the same couldn't be said for, well, pretty much everything that's going on with the filmmaking by Cremata and Co. Beneath its glossy (admittedly impressive, if taken from the director's own words that they indeed filmed this in one shot) technical execution, you can find in it included among the things that are more than frustrating in regard to the making of an indie horror film; such as the deceptively "quirky" neon-lit poster, lack of decent scares, ineffective atmospherics, weird pacing, long and longer scenes of characters talking/walking aroudn without evident purpose, and last but not least, an incomplete story. I mean, damn, guys. This isn't some episodic Scooby Doo shit where you can revisit and continue where you left off, but a movie with limited runtime and fitted with only so much stuff it could hold. Yet what Julie brings to the table here, however, is virtually nothing at all. Not even a complete narrative to draw a definite conclusion. Perhaps that's Cremata's crucial mistake when making it, shooting some mere ideas without a solid foundation as well as the means to its end. Though the premise itself represents a good idea for a compelling horror movie, and the choice for the audience to stay with the lead character inside her house instead of venturing alongside the prankgonewrong group, leaving whatever horrors they faced to words and imagination, creates an efficiently oiled sense of paranoia and dread during a few key moments.

But pain to my ears and eyes, underdeveloped ideas make a good movie not. As a result, what we have here is basically a group of unknown actors recruited to shoot a one-shot experimental technique under the disguise of a plain bad horror film, nothing more and so much less. It's not that the technique is bad per se but when your whole film is entirely reliant on that particular gimmick to garner interest AND hold the movie together, then it's worthless. And frankly, a tad bit cheating. That said, aside from being filled with endless filler moments (there's a torturously lengthy monologue that I immediately questioned why did it even need to be in there), excruciating dialogue and wonky subplots that never really come to fruition, the "story" is written, paced, and executed akin to a suburban nightmare. But no, not the kind that entails a horrifying fascination though one which you need to desperately crawl out of, because even according to the strangest of dream standards, it's a poor drunkard's recollection of his own aimless tragedy.

By the very abrupt end, absolutely nothing made sense as the filmmakers went inside a troll's cave and called it quits forever. Also, don't get me started on the out of nowhere, last minute "twist", which serves to tie everything that they've never even bothered to set up in the first place - arriving just when the movie's about to go. Although if only it's utilized as a mid-act predicament I could see a case for it to be put to good use, rather the audience suffer through nearly a full hour of chirping teenage girls before the actual premise is allowed to boil properly. Nonetheless, its slow burn nature could only last for so long before it gets the viewer cold due to the absence of any sort of payoff. Hence, the convoluted writing seeming like Cremata doesn't even know or care about the topical issues at hand (as half baked as it's there's still something here, I forgot the instant it ended so hey). As a matter of fact, I don't think there's even a finished script to this whole thing, making up random elements while the camera's shooting and given the largely improvised feel generated by the actors' conversations at times (Lili Reinhart's Jewish look-alike Odessa Adlon is a standout as the most annoying, absolutely boundary-pushing girl in the pack). In terms of spooks and scares, I'd count a mere single burned grandma, a couple of ghostly effects and a disembodied voice inside a bathroom as part of the horror imagery. The execution of these lacks energy and tension, mostly relying on pedestrian peek-a-boos than creating an effective ambience of unease to ensure the scares to be worth it. Regardless, the final act, just before the story farts a shitshow, ratchets up a distorted reality that plays with the "is this really happening" tune of whatthefuckery really well.

Overall, Let's Scare Julie ironically cares more about its gimmicky technical feat rather than telling a coherent story or attempting to scare the viewer's nuts off, so that should be the first thing to come to mind if you're having a hard time deciding on whether or not to watch it. For myself, I'm pissed more than I'm impressed so one and a half star it's baybeh.

P.S. By the way, after a one month hiatus I just wanted to say hi again people.