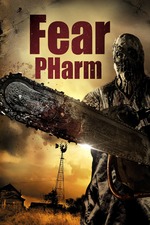 Quick Review
While definitely an entertaining watch, I still feel kind of conflicted in rating this obviously B-grade horror yet better-than-you-expected one at that. On one hand, it's a solid slasher setup, moves like a well-oiled, lean and mean fright house machine with some great use of tension and cornfield scares. On the other, it also posseses a satirical edge that fails to live up to half of the potentially awesome setups; a badass ninja-like final girl, a goofy cult family of killers with purely business-inspired motivation, and a distastefully nihilistic ending that fits to the mold of your standard slasher. Sure, there's nothing inherently bad about any of it and for a relatively low-budget creeper both the production value and direction prove amiable at transcending the movie above the typical indie look. Directed by Dante Yore from a script by Yore, Mark S. Allen and Howard Bird, Fear Pharm gives the viewer exactly the taste of its premise; that of a haunt family who hunt teenagers possessing the perfect skin in their own corn maze. The direct and casual storytelling allows the filmmakers to explore the straight horror nature as well as the camp moments with satisfying ease, bolstered by a couple of (actually) funny jokes and lotion gags. Heavy on atmosphere too, as it's shot on location at Cool Pumpkin Patch, that Yore and DP David Minadeo manage to accurately capture the Halloween fall vibe the moment our protagonists set their foot on the frightful corn maze. The villains themselves who own it possess a distinct, Rob Zombie fucks The Texas Chainsaw Massacre feel through their edgy clown/scarecrow (which is used for at least one effective scare) outfits, slapstick demeanor, and being just plain likable in how familial they interact with one another. Their entire reason for committing the murders is indeed a product of camp and ultimately leading to one silly punchline at the end; less satanic and more pharmaceutical. All while the poor, stuck up teenage characters are very much contained within the usual slasher box sans assholery, annoying yet not exactly overbearing. Except for one character named Rustin who gets under your skin with how he wouldn't shut up and being a fast talker early on, but his death scene is easily one of the best parts of the movie - and his sister Melanie aka the final girl, who gets the chance to be an unpredictable and defiant heroine during the first hour or so, right before the writers flip the coin for the worse, ending the story on a rather sour note than expected. And the kills? They're somewhat basic and utilize the most fake looking CG blood spurt you'll ever see. But I can overlook that fact due to how well-crafted the horror theatrics around them really are, as the suspense of the maze sequences is executed with intense care and flows rather smoothly. Honestly, the only issues I've with Fear Pharm comprise of its twisted conclusion (I think the final girl should've deserve the win considering her applause-worthy last stand) and including a few more extra minutes wouldn't hurt either. Overall, I'd recommend to save Fear Pharm for your seasonal Halloween watchlist to get the maximum experience as it's pretty big on the mood (and gore) than a casual watch for the day.