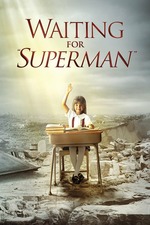 This documentary about the American education system and the development of education in the USA on the basis of individual children, teachers, experts and schools. There is a lot of information about the financing and the different school systems (federal versus regional). We are told that the cost for one inmate per year is 33.000 $ and the cost for one pupil is 8.300 $ per year. It´s being said that an inmate lives in some kind of expensive hotel, doesn´t work and doesn’t pay taxes. As far as I know this isn´t true: Many of the prisons are run by private corporations who exploit their inmates who do work a lot but don´t get paid (see “13th” for example). The equation that is being made up here without giving it a second thought is: bad inmate gets 4 times as much money as a poor schoolkid – this is populism in pure culture. Another reason that is being made responsible for the problem are bad teachers, who are getting their payments even they are of no use. They would sit around for years waiting for disciplinary hearings. I don´t believe that bad teachers are the biggest problem for schoolkids of the USA, respectively I´m missing the question what´s really going on with these “bad” teachers? What makes them “bad”? The producers use secret video recordings of scruffy teachers who read newspapers during class or hang out in run down community rooms. I feel these scenes try to make me dislike these “bad” teachers. Instead I wondered that these teachers appeared more like spiritless teenagers and I imagine that maybe their development (into “bad” teachers that is) had something to do with their working conditions? Nobody decides willingly to become a shitty teacher and not care about the pupils. I have met some teachers who told me that their education doesn´t prepare them one bit for the extreme situations they have to face in their job later. And many of them feel overwhelmed by their daily work, much less of the handling of children with behavioral problems and their often maladjusted parents. I don´t think that the solution would be to through out “bad” teachers. This is similar to throwing out children with bad grades. “Waiting for Superman” graps too short (greift zu kurz) and tends to improper simplification.
I prefer “Alphabet“ much more, although both documentaries can´t be compared 1:1, since “Alphabet” informs about global school systems and the way children learn and don´t learn.