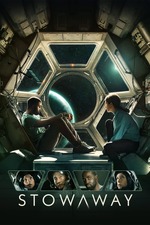 An enjoyable and tense couple of hours, the Stowaway of the title our sympathetic character, and probably the strongest performance too from Shamier Anderson in a quartet of strong performances, just a shame about their characters (or lack there of).

After 95 minutes of nicely paced anxiety and unrest, the ending arrives, and much to I think everyone’s surprise, the credits roll. It’s a jarringly sudden, bloated finish, and in light of what came before it’s rushed, underwhelming and surprisingly shallow. What precluded is some intriguing exploration of ethical predicaments n a moral plight, on an already failed mission with a destiny of potentially certain death, but the character’s lack depth and wit, and as a result the forced climax lands more like ‘oh wait, so i’m meant to be sad right now?’, whimpering out and drifting off into space, taking all the suspense and feeling with it.

Also one thing that absolutely ruuuined the ending n maybe the full thing was the literal UP music. I’m not even joking. Those piano keys started n I was plucked from this disastrous space mission n thrown right back into my living room, wondering why on earth you would use a piano rhythm so instantly recognisable to a fuckin Pixar movie (not just any Pixar movie, but UP!!!) in your big emotional finish ??? Sloppy, careless and frankly just really dumb. I liked it a lot till then, but that show of pure derivative n plagiarised negligence in the film’s intended tear-jerker of an ending left a sour taste, was cheap and manipulative of the audience. Jeopardised the enjoyment of the entire experience with such daft n passive decision making