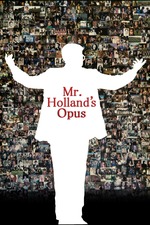 When my wifi was down, I was forced to flip through the channels in order to find something to do in what precious down time I had, and I stumbled upon this movie just as it was starting. I had no idea what the title was, and I had no idea what it was about, but I was desperate. So I watched it and tried to play detective and figure out what the movie was actually called before the end (which is harder than you may think, when you can't remember Richard Dreyfuss' name).

I succeeded, but I also was treated to a surprisingly fantastic movie in the process. There have been 2 movies that have made me cry - including Schindler's List - and this one makes three. Dreyfuss' performance and the script create one of the best character studies I've ever had the pleasure of seeing, and a really rich tapestry of the life of a human being.

There are some saccharine parts, and an underutilization of the women in the story (we've all been here before) but it did make for a surprising and actually really enjoyable afternoon where I would otherwise be watching the idiocy on MTV. Bravo, Mr. Holland's Opus, you saved me from that.