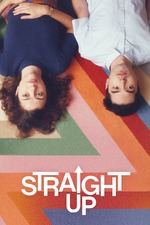 I have a kind of morbid interest in this burgeoning genre (which HAPPIEST SEASON and ADAM also fall into) of films in which homophobia is a narrative fulcrum, something without which the film wouldn't make sense, but in which actual homophobes are curiously absent, save in this case Randall Park's character, whose most homophobic act is hugging his son when it turns out he (might) have renounced the most vanilla possible iteration of a gay lifestyle, one that shares straight culture's revulsion for anal sex and views gayness as irredeemably stained by it. I guess maybe this is the sort of story that you get when queerness is (as Todd's friends all, sensibly, remind him) more about what you supposedly "are" than what you do — to be fair, though, every shred of something that could be called "embodiment" being stuffed into the space of the hypothetical might be the actual condition of many of our lives now. Overall, maybe you get a sense less of anything to do with what it means to be gay or straight from this film and more a sense of LA, and perhaps by proxy everywhere else, as this maze of blithely tasteful furniture and influencer chic in which your friends are all, presumably, doing something, and there's always another camera to stare into, another presumed audience just out of view.