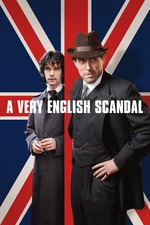 “Now, boots, badgers, and I must show you the wallabies later. What else? Oh yes - queers.”

I’ll be damned if I don’t love these fast paced, witty, over-the-top produced dramas that the BBC spit out every so often. Hugh Grant is so refreshingly good in his portrayal of the sleazy, power-hungry old politican who knows exactly how to charm everyone around him. What a glow-up from all the tired romcoms from the 00s! And Ben Wishaw, though less surprisingly, is just as good as the lovesick, childish young man with no self-distance.

At this point, BBC really knows what works for their audiences. The engaging music, the tight editing and stylistic choices (like cross-cutting, on-screen text, clever transitions, basically everything Sherlock does) the tongue in cheek humour, the costume drama, the casting of at least two well known and well loved actors. And honestly, why quit a winning concept? I’m having the best time with this mini-series so far, mostly because it’s so sure of its own concept. The extra mile has really been traveled in order to reach higher comedic and dramatic levels, and the casting of those veteran actors really helps engage and invest you from the start. I barely even care that this is just about a bunch of stupid white men doing dumb shit!