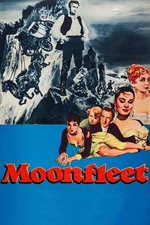 Moonfleet undercuts the expectations of its children’s adventure plot through a series of memento mori that pervades the film’s atmosphere with an uncanny sense of dread. By selecting a few moments which stood out on this viewing, I hope to perhaps shed some light on a truly mysterious film.

Early on in the film, John Mohune passes out and wakes up to see faces of smugglers looking at him from above in a semi-circle. The human face comes across as artificial and provokes a sense of unease through caricature.

When Mrs. Minton first sees John Mohune, Lang frames her in front of a tapestry with the peculiar detail of a snake eating its own tail.

After a lightning storm, John Mohune holds in his hands the head of a broken statue. This action further evidences his clear fascination with statues which consistently appear throughout the film as sinister motifs.

Young girl appears in manor’s garden all of a sudden. Explains she came in through a secret entrance but initially seems like an apparition. She is even dressed in white! Incidentally, several statues decorate the garden and are usually just on the edge of the frame in this scene.

During the church scene, Lang often cuts to the statue of Mohune’s ancestor Redbeard. The figure contrasts with a pitch-black background suggesting perhaps the darkness of the Mohune family’s past.

The ominous angel statue that frightened the boy upon his arrival in Moonfleet is arguably even more eerie when first shown from the back, stretching up into the gloomy indigo sky. Now Lang firmly establishes that this almost-supernatural figure stands within a graveyard. Indeed, it guards both the Mohune crypt and the smugglers’ meeting place. A great hallmark of Lang’s cinema is the way mystical anomalies disrupt the overall materialist world. For me the angel is the most crystalline example of this pattern in the film.

While in his family’s subterranean tomb, John Mohune discovers a skeleton clutching his family’s crest. Once again, every path--in this case seemingly the only path--leads to confrontation of death manifested in the corporeal world.

When John Mohune is calling for help, Lang cuts to the placard with the Mohune name on it, shrouded in darkness, except for a sliver of moonlight illuminating the name itself.

Late in the film, Lang positions his camera from within the well, Mohune peering from the basket down below. The yellowish tint to the bricks in the well gives the illusion of a golden shine, like that of a great treasure that is surely hidden inside.

Love in the Time of Twilight