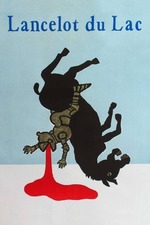 Lancelot of the Lake

(this is my first attempt at a review, so please be kind!)

robert bresson presents his moralistic revisionism of arthurian myth to the viewer of lancelot du lac from the start. the film opens on a hand gripping a sword, wearily struggling to swing it. we are witnessing two knights in combat. the camera obscures their heads until one knight decapitates the other. blood oozes out from the defeated man’s corpse. men do not die with honor; they die ignobly, brutally, and pointlessly. death is pointless in lancelot du lac because nobody ever attains what they desire. from the first scenes of dialogue establishing the failure to acquire the grail to lancelot’s dying exclamation of ‘guinevere’ upon a pile of corpses, this is a medieval europe stripped of mysticism and bereft of the grace. lancelot du lac is composed of precise short takes. at a mere 80 minutes long, the film seems more like an action film than an expression the so-called religious asceticism bresson is mistakenly known for. typically bressonian images of hands and feet in motion are coupled with the limbs of horses, reinforcing the materialist physicality of the film. by focusing on countless indistinct limbs, bresson removes a sense of individual purpose from these knights in both life and death. bresson also punctuates scenes with repetitions of gestures: the raising of helmets, waiving flags, jousting lances against shields, fitting saddles on horses, and finally the corpses of the king and his knights. this cutting pattern functions like a sensuously satisfying rhythmic phrase in music. but a better musical comparison might be the film’s soundscape. generally speaking a bresson film has as much an aural presence as a visual presence. this film’s collage of sounds--the clatter of armor and swords, the calls of horses and horns, and the squelching of wounded flesh--exacerbates the pain of a miserable land. chivalry isn’t dead; it never really existed.

Dust in the Wind