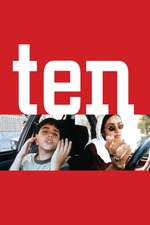 These four spectacles proved, among many things, one peculiar aspect: Kiarostami is the best director ever to film conversations and extraordinarily absorbing journeys inside cars. He is a fan of in-car scenes and the astonishing rural and natural landscapes surrounding the four wheels.

Well, why not make a whole film about it??

An idea sounding as insane as the degree of quality of the resulting film, Ten provides 10 insanely realistic journeys through the streets of Tehran seen through the eyes of a middle-class Tehran female car driver with many passengers, including her own son. The steps for this were easy:

1) Set two digital cameras on both sides of the car: the driver and the passenger.
2) Hire unprofessional actors to add a sense of realism.
3) Divide your feature into ten segments, the easiest rounded number to remember, and add social criticisms and heated discussions about marital and extramarital affairs, about family instability and the most obvious topic in Iranian cinema: the extremely insane, sexist, oppressive, chauvinistic, retarded and unfair life difficulties of women in modernity living in morally underdeveloped, close-minded and animalistic "societies" such as Iran and Saudi Arabia. Truly, I had never seen Kiarostami so angry and explicit at his own culture against women!!
4) Let them speak. Let the "screenplay" be partially improvised and base it on personal experiences of the actual actors.
5) Be chosen by "Les Cahiers du cinéma" (France) as one of the 10 best pictures of 2000s (#10), ranked #47 in Empire magazine's "The 100 Best Films Of World Cinema" in 2010, and Ranked #447 in Empire magazines "the 500 greatest movies of all time" in 2008.

Believe it or not, a film based 100% on dialogue can be brilliant, because the power of the spoken word is massive.

Kiarostami experiments for the very first time with the cheap look of digital cameras and what could have been, perhaps, his riskiest project if it had not been because of his renowned auteur reputation already established by the time. Performances were extraordinary considering the experience of the actors and the elements of improvisation allowed throughout its development, and the fact that the film made me wish to throw the kid in the middle of the highway to be run over by a cement trailer of 10 wheels so that he could stop screaming such ignorant and stupid nonsense proves that the cast achieved its purpose, and that little brat bastard can surely act!