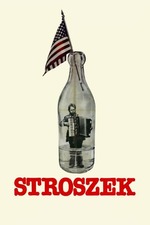 Stroszek is also the name of the leading character in Herzog's Lebenszeichen (1968). Herzog got the name Stroszek from one of his former classmates who once helped him cheat on a test and used his name as a tribute to him.
-IMDb Trivia Section

There is certainly a metaphor towards the ending that references both the animalistic nature of men, and a money-driven cycle of repetitiveness where people are willing to live the rest of their lives under a capitalist mentality and a fixed corporativist job to justify their existence as "successful". That is what drives the characters' wishes, erroneously, in Herzog's inventive and daring destruction of the "American" dream through three characters that, initially, might be considered as immediate outcasts by "civilized" society: the criminal, alcoholic tramp, the prostitute and the elderly, for all the reasons you can imagine.

Herzog screams for humanistic empathy towards the most unlikely trio of characters in a constantly genre-shifting journey of improvised randomness while also tackling correctly many topics that refer to the illusion of life in a "first-world" country being better than your local problems, where the problems actually begin with yourself and your lifestyle. This argument might be debated with the old friend, Scheitz, as he might not be directly accused of anything given that he's the one with the less clear background; nevertheless, he falls under the same illusion of the "American" dream, so Herzog's message is consistent in the sense that it attacks everybody indistinctly. Hence, we embark on a two-episode journey where, suddenly, despite the local tragedies, West Germany seemed as the better option, but not as the lesser of two evils. The film always invites to reconsider the own lifestyle before escaping your problems through the illusion of money and a better life abroad. Everything idealized is always better in the mind than in reality, unfortunately.

It is impossible for me to join the fans bandwagon considering it as one of Herzog's finest, but it might be his most accessible and empathetic despite the pervasiveness nihilism of it all, simply because it correlates with "America's" empathy towards the feeling of escapism through a road movie and how alien foreigners feel for locals, and because it disguises its melancholic pessimism (which is undeniably realistic) with offbeat, spontaneous, original comedy to alleviate life's tensions. And that is not such an unrealistic approach to life, frankly.

The dancing chicken is the cinematic miracle of the century, and Michael Winterbottom acknowledged it properly. Ian Curtis did too, but in the most inappropriate way possible.