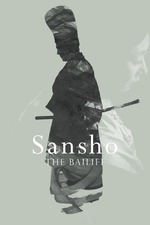 Kenji Mizoguchi, frequently hailed as the true Japanese film-making master, has adapted one of the greatest and most heartbreaking folk tales ever conceived by Eastern culture for cinema. Not only that, but Sanshô Dayû is the best film he ever directed, as well as one of the most extraordinary achievements in cinema history. Mizoguchi, being a true Buddhist, a strong defender of the fragility of the human soul and a poetic supporter of societal ethics, propagated the story of Sanshô Dayû to worldwide audiences, a tale that achieves its purpose: to become an effective and deeply honest wake up call for the spirit within mankind.

The film is set during the late Heian period and tells the brutally moving story of an idealistic, compassionate governor who is sent into exile because of disobeying the reigning feudal lord, leaving his wife, Tamaki, and his two sons, Zushiô and Anju, behind. Years later, the three of them decide to embark on a journey in search for him united as the true, loving family that they are, but, because of destiny's cruelty, are finally betrayed one night by a seemingly caring old woman who offers her home for them one night, selling them to malicious slave traders separately. Whereas Tamaki is sent to the big island of Sado, Zushiô and Anju are finally taken to a savage and ruthless bailiff named Sansho in Tango. The family, as torn apart as it is, is forced to work as slaves under inhuman mistreating and oppression. One fact is that Akira Kurosawa's Shichinin no Samurai (1954) took the whole attention and worldwide popularity that year, a film that, because of its influence, would literally become the Asian father of blockbuster films, despite that Mizoguchi won a Silver Lion in the Venice Film Festival, just like Kurosawa did. The truth is that they are not comparable films. They belong to completely different genres and have different filmmaking styles, being perfect due to their own specific reasons. Although I consider Shichinin no Samurai as the best Japanese film of the year, Sanshô Dayû is a close second, and basically the difference of the admiration I paid to both of them is almost nule.

I'll first mention and worship the technical aspects of the film, starting with the direction. Kenji Mizoguchi is a true master of cinema and bringing such an epic story and a complex drama to the big screen is a serious challenge: a challenge accepted and accomplished by him. The best thing about the characters is that, besides being very unique and distinguishable among them, they are very complete, with their own emotions and feelings being stated very clearly, and they suffer changes, most noticeably in Zushiô, alias Mutsu-waka, the name he used for keeping his true name secret, just as Anju used the name Shinobu, "the woman who endured through anything". This film has character development at its finest. The pace of the plot is very accurate, since it is not slow, neither fast. It is a strange mix of both. First, we are introduced to the fantastic world of Mizoguchi's mind, which can be described, principally, as peaceful. Suddenly, we make a jump through a time period that covers several years. Even so, the feeling of skipping important events in the lives of the characters is absent. The exquisite composition of the film makes it as perfect as a feature film can be.

The strongest and most accurate proof of the artistically balanced beauty of a masterpiece is its cinematography, and Sanshô Dayû has one of the best cinematography samples I have ever seen, literally. Each shot, each scene, each sequence of events and each camera movement is marvelously orchestrated, adding a lot of visual quality and highlighting the emotional tone this masterwork provides to its utterly amazed viewer. It seems like such unparalleled beauty makes up for its injustice topics and brutality, inviting the audience to reflect over their lives and the main ideas portrayed rather than surrendering and turning to complete depression and tears. If the Academy Award, in fact, split the Art Direction, Cinematography and Costume Design awards into two separate categories for black-and-white films and color films, this movie is one of the main reasons. Ironically and obviously, this film was totally ignored by the Academy. It probably makes the best use of cinematography, art direction and costume design in a black-and-white film I have ever witnessed. I salute Kazuo Miyagawa.

The performances were pretty good overall, but the best out of the whole bunch was delivered by Kinuyo Tanaka, who also appeared in Mizoguchi's previous films, Saikaku Ichidai Onna (1952) and Ugetsu Monogatari (1953). The dialogues and script are gorgeous, and yet they hide so much simplicity in them, like speaking out loud a basic and primordial idea in many different ways and through various characters, thanks to the screenwriters Fuji Yahiro and Yoshikata Yoda. Listening to the musical score was an outstanding experience; there were certain parts where I just couldn't believe what I was hearing: a genius use and mix of typical Asian instruments in a thrilling, yet tranquil manner.

Sanshô Dayû stands for human liberation and freedom, not only in the sense of resorting to our own independence, but also in the sense of fighting for justice and prioritizing honor, discipline and loyalty, customs that are mainly represented in the character Zushiô, including the resignation of power and welfare. That is where the oddity of the title comes from, since Sansho is the antagonist of the film and lacks the human transformation Zushiô had. The strongest Buddhist influence the director went through after the war is more noticeable in this film than in any other, which is an element worth adding to the story. The fragility of human's existence is accurately portrayed here, and how the abuse of authoritative powers affects any inferior social class, "inferior" standing for "less developed". An aspect I find truly genius is how the soul's fortitude and man's inner strength is represented. It is a fact that mankind is capable of enduring any kind of atrocities throughout his life independently of the sensibility the person may have; however, society's direct influence over us determine most of the aspects that will reign our lives, and our dependence towards the strong emotional bonds we build towards the most important people and material things for us is the main cause of pain, sadness and desperation, specially when loss, tragedy and deception are the main objectives to surpass. Sanshô Dayû clearly understands those concepts and uses drama in the most perfect way to deeply affect the viewer, awarding hope and heart-warmness in the end.

Mizoguchi's prime opera is not an easy film to watch, but ultimately results in reflection and self-acceptance. Sanshô Dayû discretely speaks out loud controversial, but not scandalous truths, and shares honorable and general concepts that concern the modern age. This is certainly one of cinema's greatest works of art.