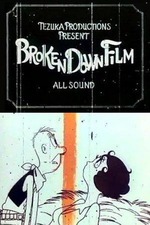 The unsurpassed Duck Amuck (1953) exploited this concept to the ultimate limits, breaking all boundaries of the predictable and conceivable. Tezuka is a daring experimentalist and, for my humble share of his work, this is his best. While Jumping (1984) exceeded technically, this one did the daring task of reviving the golden animation style of the 20s while going meta all over the place over the specific film damage technicalities of celluloid to play with stunts in the simplest and yet most creative ways.

What is the more complex effort? Which one is the more innovative? That is for you to decide. Both are admirable in different ways but this one carries creativity through nostalgia thematics and I find that much more interesting, not to diminish the painstaking, non-CGI effort of recreating a superpower dreamed by children with a single tracking shot through multiple scenarios of modernity.

Disney would do this later by making modern and old animation realms collide, but this one is a reflective piece of animation perception that tackles many unconscious aspects to a conscious level, such as taking split images and film damage as givens after watching several works of the Golden Age. I take my hat off to that.