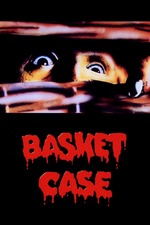 Why is it a worth-watching film then? You will rarely stumble upon a film that laughs at itself while never hesitating to be too straightforward in its themes. It is a tale about family tragedy and horror, and about ghosts of the past coming to hunt down your present. The subtext is comedic horror and a deformed human Siamese-twin is depicted as a ferociously hungry creature (hungry for both hamburgers and human flesh) wanting to get even with those that put him under a life of discrimination and pain. How in the holy name of Heaven did Henenlotter manage at some point to even make you feel empathy towards the "thing in the basket case" while at others throws the seriousness overboard with a creature that can make his eyes bloody glow with red lights before it kills? I never even noticed this partition until I had reflected upon it during the final credits, but the eighties, in all of their atmospheric and psychological depth in the horror department, almost never saw a mixture of genres and ideas as crazy and comedic as this one.

Emotionally, it is a roller-coaster ride; genre-wise, it is versatile; horror-wise, it is scary; campily, it is funny. It is not serious cinema and you can tell this even by the changes in the sound of quality when people speak their dialogues or have noticeably imposed voiceovers. Nevertheless, the graphic content is creative enough for creating an effective genre ambivalence, the comedy is effective enough for purposes of self-recognition as a B-movie and the conclusion leaves room, even if marginal, for thought regarding societal exclusion and the bonds of family... in a very twisted sort of way, especially if such twisted way involves Svankmajer-like stop motion effects that you cannot avoid loving nostalgically.

The name of the thing is BELIAL for Christ's sake. Lol. That's a hebrew term meaning "worthless". Who's the truly worthless according to Basket Case? That's a funny question to ask yourself.