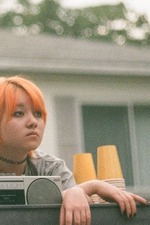 An anti-Coming of Age film that’s steeped in the clichés of Coming of Age films and is as outraged by their inanities as it is unwilling to let them go. This is the apex of “It’s our last summer after high school, what do we do with it? Let’s make a movie!” filmmaking. It’s ramshackle in every way a movie can be – shaky camerawork, often hard to follow plot, too many characters to follow, dialogue that’s either inaudibly quiet or speaker-breakingly loud (some of that is for humor), strung together from semi-connected set pieces that don’t always lead to anything, and long back-and-forth dialogue scenes that take you so far out of the movie’s energy, you feel high even when sober.

At the same time, the camaraderie of the characters and the actors playing them is SO palpable, the hangout vibes are so immersive and joyous, and when the jokes hit, they are straight-up gut punches. I had to pause a few times for laughing jag breaks. This captures last-summer-as-a-teen boredom to a tee: feeling lonely even around all your friends, hurting someone close just for something to do, pranks that go too far, grudges that last longer than they should, in-jokes repeated until they’re meaningless, and that feeling that the only person you’ll ever love is slipping away from you, even though you’ve only ever known like 20 people in your life at this point.

The Gold Ninja Video Blu-ray of this film includes both the original cut and the “Extended Heat Stroke Edition,” which was cut for use at film festivals, improving the sound mix and smoothing out some of the film's rough edges. It doesn’t do the finished product any favors – this movie is at its best when it’s at its most pinball-stuck-behind-a-bumper manic, thrashing between tedious and frenetic, inaudible and redlining, Coming of Age and Anti-Coming of Age.

“I didn’t think they’d be so spicy!”
“They’re called GHOST peppers! It’s because GHOSTS eat them!”