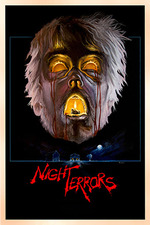 So, originally, this was meant to be The Arrangement. However, I decided to change it at the last moment for the simple reason that I have only ever seen on Kazan, namely Splendour in the Grass. Having only seen one film by the director, I felt in no way prepared to judge his films as flops or otherwise. Of course, this is somewhat out of place considering I’d only ever seen Festen before It’s All About Love, but I’ll couch that by saying that I was extremely passionate about that film in comparison to my lukewarm feelings about Splendour… In any case, I decided to switch gears and choose a film by a director with certainly a chequered career, Mr. Tobe Hooper. Like Argento, Hooper is accused of falling off dramatically after the 1980s, regressing into cheap parodies of his own glories. As I’ve demonstrated, that statement may be accurate for some of his works but certainly not an appropriate blanket statement. I am slowly making my way around to Hooper’s post-’86 canon, but Night Terrors does not fill me with hope for the rest of the project.

It’s a profoundly odd film in a number of ways. For a director who made arguably the tensest film of all time in TCM, how he manages to make something so incredibly slack like this astounds me. I can only assume that the producers (Globus and Harry Allen Towers, not men usually known for their sense of taste or decorum) probably wrenched this away from Hooper at some point and had their way with the footage, because it lacks any sense of tension or suspense in a truly remarkable manner. Its murky plot has something to do with excavations in Alexandria and the Marquis de Sade but it’s not really clear how the two bits go together. It’s mostly an excuse for long scenes of softcore pornography interspersed with occasional hallucinogenic dream sequences and some neat eye-gouging. Women run around the streets of Tel Aviv (doubling for Egypt) and cavort in bedrooms with exotic men and indeed each other until the rather dreary finale in an elaborate basement. In his day, Jess Franco would have taken this subject matter in his stride, but for the rather more American Hooper, any sense of the crazily erotic is completely muted. This extends to the rather dire performances. Robert Englund is game, turning in a committed performance as the Marquis de Sade, but even he sags under the weight of sheer atrophy in the final reel. Zoe Trilling’s performance as Genie is truly one for the ages, a masterclass in overemphasising in all the wrong places and providing some of the strangest squeaky moans of pleasure I’ve ever heard. For someone who was meant to be the film’s eye candy, she’s completely wooden and vapid, deeply unsexy in every way shape and form.

The thing is, there is the potential for something quite interesting to be made out of the basic premise. The conflict between pious Christianity and libidinous de Sadian sexuality is great potential for an erotic thriller. You could explore some really interesting Exorcist-style dilemmas there. And there are some flashes of the Hooper talent in the mix ;there’s a great shot of a head in the fridge, for example. But given that a large proportion of the main crew were Cannon mainstays and the fact that Hooper was brought onto the project late in the day, perhaps it’s not surprising that Hooper’s heart was not in this. It’s a sad piece of work.