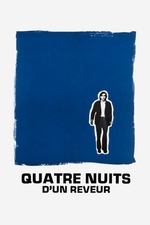 3rd Bresson (after Pickpocket and Diary of a Country Priest), 2nd Bresson this year,

My experience with Robert Bresson was, for a long time, not a positive one. To be fair, I think I saw Pickpocket at an extremely emotionally tortuous time in my life, and his ascetic stylings just came off as trite. But from there, I regarded Bresson as a bore. A pretentious bore, at that.

Then, this year, I decided to watch Diary of a Country Priest. Now, that film in general, is superb. But there is one sequence, where the Priest in question debates the notion of life and death with the local countess, after which she passes away, that can only be described as transcendent. It shook me to my very core. I understood, in that brief instant, that Bresson was far more than I’d marked him out to be. And so, when this came my way, I jumped at the opportunity to watch it.

Sadly, I was a little disappointed. However, this is often seen as one of the more offbeat Bresson films, a moody dream piece about a young couple in Paris. It’s loosely based on a Dostoyevsky story (which had already been adapted by Visconti a decade or so earlier), and concerns four nights in the life of a young painter, where he meets, falls in love with and loses a young woman first seen attempting to commit suicide. It transpires that she’s upset that her lover has not returned to her as he promised, and has decided that life is no longer worth living.

The film clocks in at a breezy 82 minutes, but the plot is threadbare. The characters aren’t completely fleshed out, which is deliberate, but it can have the unexpected side effect of making them insufferable if you’re not in the mood for philosophical dialogue coming from 20 somethings (as one myself, I've learned to distrust it). However, Bresson does provide a number of pleasures to the film, visually. On a very base note, the lead actress is beautiful, and if you like female nudity (which I do), there is a good deal of it. However, I feel it’s necessary to point out that instead of being erotic, there’s something actually quite sensual about the nudity, by which I mean there’s a tenderness to such scenes that other films might not have. One scene in particular, where the girl and her lover take their clothes off and embrace, has a curious warmth to it. Instead of bodies locked in mundane passion, it’s a tribute to how one body interacts with another, how skin feels against skin. It doesn’t feel pornographic- it feels gentle.

There’s also a good parody of French crime movies as a film within a film, nicely spoofing the hyperbolic scenarios this film so stridently rejects. Adding to the oddness is a number of live performances of music by street singers and buskers as the couple walk about Paris at night. In particular, one Latin American group on a boat provide a gorgeous soundtrack to a bridge-side stroll. It does feel, with the music and the exquisite colour cinematography by Pierre Lhomme, a little like Wong Kar Wai. I wouldn’t be surprised if he saw it, quite frankly. One more note about the cinematography, the HD print I saw it in really gave justice to the blues that dominate the film’s palette, giving it a lovely richness that accompanied the textured feel of the film.

So, while the narrative is nothing special, there’s plenty of fun to be had here. Maybe I’ll pick it up again in a few years, see how I feel. Maybe it’ll hit the spot.

1. Diary of a Country Priest
2. Four Nights of a Dreamer
3. Pickpocket