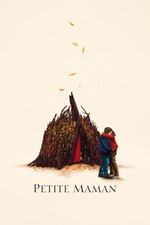 Céline Sciamma is done with violence.

Whether it be Anne's first sexual experience, which the director now regards as assault, in Water Lilies, or the scene where Laure/Mickaël is outed in Tomboy, or the direct violence of the banlieues in Girlhood in the past, the filmmaker now chooses to turn the camera away from her young characters in pain. For magazine La Déferlante, Sciamma says "You see, today I wouldn't make that scene again. I couldn't film such violence" in regards to the second. She's grown up, past the need to show this physical and emotional violence towards her young characters, as it no longer feels cathartic this far in retrospect.

With Petite Maman, the two eight year old leads deal with grief, doubting a mother's love, and one nervously anticipates an operation. They do not go through what they fear onscreen, because there's no need to. They discuss their fears, and use their unique perspectives of where they live in their timeline to console eachother that it will be alright. Nelly knows Marion's operation will go alright because she exists, and Marion knows herself well enough that she hasn't truly left Nelly in twenty three years time.

This privacy awarded to the characters isn't a first time for Sciamma, as the original screenplay of Portrait of a Lady on Fire looked quite different from the final product. When Sophie tries to get rid of her child with a tea, Marianne tells her it's alright to cry out, but it is Heloïse who lets out a pained scream again. She is falling over the edge in this version, and more open that she knows this marriage, and having to have children with this stranger, will hurt her. When the two are high on the witch's salve, it looks as if the unfinished portrait is mouthing to Marianne that she loves her. It is moments like this that Sciamma's magical realism in Petite Maman feels like a natural progression.

She had done some screenwriting work on horror tv series Les Revenants at the start of last decade. Showrunners aren't open as to what, but say Céline had brought in to write the heart of the series, which is widely agreed to be the character of Julie Meyer, and a young boy whose come back to life named Victor. Much like Céline's earlier films, Julie has a traumatic sequence showing her backstory, that, while being a metaphor for something more common but often triggering, is depicted quite unflinchingly. Her character finds Victor and brings him home, becoming a mother to him after the loss of her unborn child, and being left by her partner Laure, years before. The healing process, and the comfort, the getting to deal with her fear that Julie gets within her arc is still present in Sciamma's newer writing, but she now doesn't write the active pain of her characters.

This choice to limit what's onscreen to the good that the characters find in a story is a radical treatment of a memory. Often called conflictless, it instead is a choice to renounce our need to feel pain to empathize with someone's conflict. Though Portrait of a Lady on Fire isn't a traditional happy ending walk down an aisle, its characters live to see the end, lock eyes a final time, and the negative parts of their lives are sidelined for the moments we watch of their distant reunion so that we can see them remember the joy they had. Petite Maman has as firm an ending as any, where Nelly doesn't reunite with her young mother again, and leaves the house behind, but here we have an apology. We have characters say they're sorry for how they scare eachother, and reassure that they trust that.

The film is a radical act of kindness, choosing to show grief in a way that we smile more than we cry, and what hurts is the audiences connection to their own lives with what's in the film, not seeing our characters hurt. Her cinema has grown up past the diaristic autobiography, to being able to remain personal while feeling protective, taking care of an audience so she can make a film about children that children can watch now, a film as a labor of love that feels like more of a hug then trauma therapy these days.