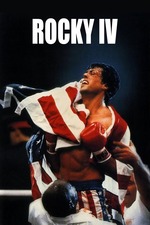 After the mood I was in last night , I decided to give #RockyVsDrago a 2nd watch. As you could see in the video, I was extremely agitated and disappointed by the theater failing to show the movie. Also, this was a movie I'd seen 100s of times over the years.

I took the 35 year nostalgia glasses off with a fresh perspective, and I get what Stallone was trying to do. I felt like an "alt universe" Rocky. It was a better experience. Not a perfect one by any means, and I still prefer the theatrical. But Apollo's fight was a huge step in the right direction for it's extended length. It gave the character a stronger foot to stand on, giving him a more impactful death. I stated this in the review, so I've always felt this was an improvement.

I stated I would never watch this version again. I was wrong. Yes, there are changes I still really don't like, like the entire opening sequence. Way too much Rocky III, and the flow into Apollo at Rocky's house feels "off" for some reason.

A couple of things were better this time though. Drago had some nice moments to shine in this cut, especially in the final fight. We're shown a bit more humanity in the character, which is something I was against at first. But he's still a force, but there's more of a reason in the DC, and you see where he's coming from.

The training sequences seem to be be updated musically. There's more punch to "training montage" and "heart's on fire". It's still very similar to the theatrical version, with a few new additions that honestly I could take or leave.

The final fight. This was my ALL TIME favorite fight sequence in film history. The alternate take was jarring to say the least. This time around with a clear head, this was actually the greatest achievement of this cut. It feels more personal, on both fronts. The new punches sound more organic, and the fighting style seems more visceral and slightly less choreographed, in a good way.

Lastly, Rocky walking out of the ring, and fist bumping Drago. I'm half/half on it. I don't think Rocky would forgive that quickly to the death of his friend. But I do like him walking out on second watch. It kind of makes sense. Kind of a "my war's over" approach.

In the end, no matter how I feel, I am glad Stallone got "the stuff in the Rocky IV basement" out. You can tell this was a passion project for him. He wanted to slow things down a bit dialogue wise, to get a better understanding of Apollo's, and eventually Rocky's perspective. I can dig it.