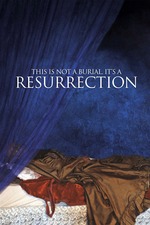 It marks out Mosese as a notable new voice in African cinema. It comes to us from Lesotho, that small independent country landlocked within South Africa, and stars the late Mary Twala, who gives a searing, fierce performance.

It holds nothing back: Not aesthetics, not performance, not tone or sensation. Mosese composes his film as one part tone poem, one part scathing political critique, one part dirge and one part memorial, because death is a complex beast.

Saying goodbye hurts, especially when you’re the last one left, like Mantoa. But This Is Not a Burial, It’s a Resurrection, in between the sound of grief that’s somehow inchoate and eternal, finds the space to celebrate life through the marking of death.

It’s philosophically, spiritually, and historically enormous, with existential themes sitting alongside African storytelling traditions, and indictments of colonialism and cultural destruction expressed with astonishing images and artistry. By questioning so-called “development,” the filmmaker Lemohang Jeremiah Mosese may also want to reflect on how Christianity, colonialism, and modernization have entangled with each other.

It offers a vivid, beautifully crafted reflection on identity, community and the tension between respecting age-old traditions and accepting the seemingly unstoppable march of progress.

I recommend seeing it more than once; luckily, it’s so gorgeous and spellbinding that it invites repeat viewings.