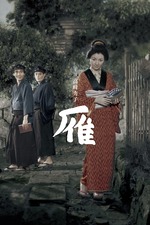 Another tale of people hustling each other and their desperate dreams of escape. It looks absolutely astonishing and maybe it is first and foremost a showcase of the amazing level of technical skill in the Japanese film industry of the 50s. I don't know if there ever was anything comparable anywhere else in the world at any time.

Still, not quite my kind of film. Toyoda certainly knows how to push its buttons, but it is a bit too much in love with its plot mechanics for my taste and it lacks the sense of lived-in social reality of the best Japanese films of the era. Here, everything feels a bit closed-off, world as function of story instead of story function of world. Takamine is marvelous, of course, but her performance too is much more showy than in her films for Naruse and Kinoshita.

Toyoda obviously is an expert Metteur en scene, though, ingeniously combining quotidian realism (the use of space in Otama's house is pretty much perfect) with poetic, almost abstract flights of fancy. Like when she sees the student for the first time: Otama's face trapped between the bars of her window, but suddenly surrounded by pure black and therefore freed. Also the stuff with the umbrellas and bittersweet the last few minutes. Somewhere hidden between all of those stage-tricks is a great melodrama of defeat closer to John M. Stahl than Mizoguchi.

Emanuelle and the Last Cannibals