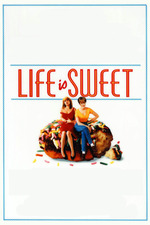 I don't know anything about Margaret Thatcher. My knowledge of her is extremely limited; I know she had some effect on England and that Mike Leigh is not particularly fond of her. Aside from that, my mind is pretty empty when it comes to knowledge about her. The connections made between current and post-Thatcher England in both Meantime and Naked ended up being completely lost on me. Yet, while thematically struggling to understand certain aspects, I still loved those two films.

Leigh can write incredible characters. He can write some of the snappiest and wittiest dialogue ever portrayed on film. In creating such intense dialogue, he reels the best out of his actors. The slow, lumbering Colin and his ruthlessly immature brother, Mark, rise above my thematically vacant mind in Meantime. The manner in which David Thewlis rapidly spits up brilliant analogies and philosophies in Naked is what garners my adoration for the film. I find myself stumbling around when other critics comment on the brilliance of her effect on the film - but I still love the movies.

To find Leigh working his magic on his second full length, Life Is Sweet, without tying it to such strong political narratives was a relief to me. I appreciate Leigh most when he is discarding major plot lines in favour of a pure focus on character and language. Naked and Meantime don't necessarily have a story. We have an idea behind it all but then we mostly just focus characters living their lives and discussing manners. That's why I enjoy them more than movies like Secrets and Lies and Vera Drake (even if only by a slim margin), because they allow Leigh to freely work with his brilliantly crafted conversations.

Life Is Sweet is like the stretched out version of The Short and Curlies: looking directly at the family and the friendly relationships around them. It absorbs their relationships in an infinitely knotted ball of comedy and bleakness. Every character has their quirky bits about them while simultaneously being swallowed by this depressing void.

A loveable mother who's constantly cracking jokes while trying to carry the weight of her family's disagreeability. A father who works hard and has a big heart but is easily swindled. And two daughters. One with short hair and a rejection for femininity - who I expected to be the family's initial outlier - that works as a plumber and seems only half-interested in all familial relations. The other a long haired, apathetic, yet phonily revolutionized punk who is unemployed and a general pain to be around.

The dynamic between these four is constantly expanding outwards into relationships of friendliness, sexuality, and deliberate manipulation. Leigh's philosophy here seems to be that we can only help others to a limit. Some will trick you, some are helpless, but some really just need a person there for them to gain their individual motivations. An idea about how some people need us and others will depend on our generosity.

You might need two boxes of tissues during your watching. One to wipe away the tears of laughter and one to blow your snotty nose into as you weep. The whole mood of the film can flip in an instant and it's up to the viewer to keep up with Leigh's spiralling atmospheres. There's never any imbalance to the humility and humiliation of the story.

Mike Leigh is one of the masters of language in the film world. Dialogue can be a hard aspect to tackle and some filmmakers work best when they limit or completely restrict that factor. Leigh is different. Leigh needs the voices of his characters. I find that when he focuses too largely on his plots, his tales become paled out and bland. It's when we everyone can sit together and just speak that he flourishes. They say a picture is worth a thousand words; in Leigh's case, that picture needs thousands of words before it can even begin being sculpted.