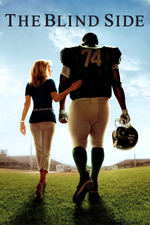 A stirring drama that explores the dangers of affirmative action, Christian values, obesity and being sassy

It's attempts at emotional manipulation are bordering on vulgar. True story? Sure, stereotypes are based on truth as well, but they're always shallow representations of reality. This film is nothing more than that, something even Bullock's slightly less mediocre performance than normal can save.