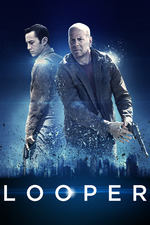 Time travel is perhaps one of the most difficult thing to get right in a film. This film does everything wrong and is a walking paradox.

And I couldn't care less.

Rian Johnson does something very clever in this film which he penned himself. He doesn't explain anything. He asks us to accept the rules to his universe, to his vision on time travel. That is a big thing to ask of any audience as it requires a huge amount of suspended disbelief. What he offers up in return, though, is what made me chuck disbelief out of the window and buried my nagging inner voice that kept shouting at me not to like this because of genre related pet peeves. But more on that later.

Why is this entire film paradoxical? Well, if we are to follow logic nothing in this film could have happened as the older Joe should never exist because he has already killed himself. That's kind of a problem. And remember that scene where they torture Joe's colleague in order to get his older version? That scene was absolutely fantastic, but also a complete paradox. If he doesn't have legs in the past, how can he have them in the future? This would usually completely take me out of a film and annoy me to no end. But this is Johnson's universe and it has its own rules and if you go with it there is so much fun to be had.

We are given the information that time travel exists. Apparently, everything that happens to your past version that hasn't happened in your future version's timeline has a direct effect on your older self. This is a paradoxical notion, but it is Johnson's view of time travel. He tries to explain this to us through Willis's monologue in the diner, which is by far one of my favourite scenes in the film. He explains it like new memories that are 30 years old, 'Thirty years ago is yesterday' he says. That conversation he has with his younger self captures not only the core of his vision, but also the heart of his film.

The best Science Fiction films or novels are all centred around a conceit that appeals to the imagination. The notion of the executioner that has to kill his future self is as intriguing as it is original. By tackling the story the way he does it, Johnson has given us a protagonist and antagonist who are the same person. One with his eye on the job, the other a hardened criminal scarred by life, both extremely self centred and single minded. I read in a couple of reviews that people were bothered by Gordon-Levitt's make up. I, for one, wasn't. His performance is nothing but stellar. For all intents and purposes, he is Bruce Willis. I struggled to remember what is real face looked like. He is matched by Willis on top form. He is driven, still has a visceral energy to him and manages to give his character depth and emotion in the brief flashes Johnson allows us of his character's life.

Johnson's visualization of the near future appealed a lot to me. I loved the old cars with the solar panels on the hood. Loved the clunkiness of most of the technology. It all felt believable. He also paces his action perfectly and gives us some wonderful visual tricks and perspectives that betray just how talented a director he is and how easily he can switch between styles. He will definitely be a director I'll keep following. He also isn't afraid to take risks. He does some pretty heavy stuff here in this film, all to add to the characterization of Willis' character. He has a couple of scenes that had me and the audience in stunned silence, most particularly during one execution. I hadn't expected them to actually go there.

It isn't a perfect film. It has some plotting issues, mainly of the deus ex machina variety and the fact that some things are just a bit too convenient. But it is such a solid and well made film, made with conviction and creative energy, that it is very hard not to be taken along for the wonderful ride it is.