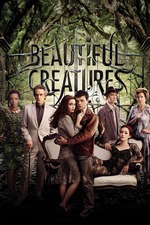 Doomed from the start to be considered a Twilight clone, this film deserves a lot more credit for actually being watchable and somewhat interesting.

Sure, this film is trope heavy, covering just about every base imaginable a film based on a fantasy novel for young adults should cover, but found the backdrop rather charming and some characters actually interesting. These stories always have to be about troubled love and for that to work you need a central couple to believe and invest in.

In Beautiful Creatures this partly succeeds. Alice Englert is ok, but a bit one-note. It is Alden Ehrenreich, however, who completely sells this film for me. His character is genuinely likeable and he portrays him with the perfect amount of charm and humour. He is visibly having fun with what he's doing and that makes it very easy to go along with him. Add to that an Emma Thompson who goes so far over the top she comes full circle back to being hilarious and most mistakes this film makes are readily forgiven.

At 120 minutes it is a tad too long, but it is an enjoyable fantasy nonetheless.