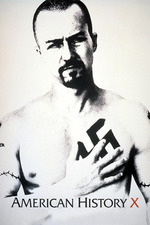 This film proves that if a simple message is told in a very simplistic and almost unbelievable way, but is told with fervour and acted out brilliantly, it is in the end the basic emotional connection to the topic that remains. And that is the true strength in this film that was hindered by a troubled production and attempts to deal with a tough subject matter.

It is a shame that most of this script, most notably the character development, is given the 'fairy tale' treatment. It is mainly dependent on simplistic contrivances and an audience willing to accept them. The motivation for the main character to go from A to B is not that convincing and I, for one, would have loved to have seen his road to point A fleshed out more. There are hints at that, but they remain that. It just feels uneven, probably due to problems on set, but still, a shame.

Why then do I still regard this film so highly. That is mainly due to Norton's performance. He somehow makes it work. When he's good, and he is exceptionally good here, he has the uncanny ability to convince his audience of the verity of what he's doing. He makes this film work and makes the rather contrived change believable and the subsequent events emotionally engaging. As seperate entities his pre-change and post-change characters are too contrasting, but as individuals they are portrayed magnificently.

There are some brutal scenes here and while they sometimes feel as plot devices to manipulate the audience, there is no denying the impact they have. In that respect they do serve a purpose and add to the almost relentless spiral of hate and violence most of this film encompasses.

So for all its problems I just cannot be anything other than impressed with it. It leaves a dent, as it is brutally honest at points and unrelentingly bleak, not falling for the fairytale ending trap in spite of the fairy tale writing.