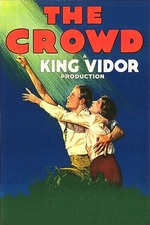 Would make for a great double feature with Sunrise. Albeit for different reasons, both Murnau and Vidor show men pushed to the precipice of destruction, to the edge of the abyss (they were also released just a year apart). These are the 1920s, so naturally the family dynamic of Crowd is archaic, but it doesn't marginalize Mary one bit: furthermore, she comes off as stronger and even more stable than John. His sudden realization that he needs to get a grip on his life comes a little too easily, but the film had me in the bag by then. Wouldn't be shocked if Capra studied it for that little film he made with Jimmy Stewart shown every holiday, and - spoiler alert - Carax used the last shot of the audience as a homage for his own Holy Motors. Ahead of its time.