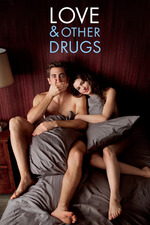 "You'll still go. I just may have to carry you."

What an unexpected treat! I struggled with the first portion because (a) I am not crazy about Jake Gyllenhaal and (b) the film tries too hard to establish the late-90's setting using music.

But the obsession with music fades. And then we get Annie Hathaway, who initially comes across as a slighly over-tall manic pixie dream girl. She gives a terrific performance as a young woman dealing with rare early-onset Parkinson's, and she transcends the manic pixie label by being her own person. She and Jake have excellent chemistry. And though the plot direction follows the predictable romcom trajectory, it's a satisfying and believable journey. If you don't tear up at their scene in the bus parking lot, then you have no soul.

There's a sweet subplot about Jake's extra-dorky younger brother, who recently took his software firm public and is now worth $30 million but who has split with his wife. The brother could obviously afford to stay anywhere, but he chooses to crash on Jake's couch. I like what it says about Jake's worth as a person, that the brother should want to be there, an important aspect of Jake's character arc.

ETA: The film toys with the idea of challenging the modern medical system, especially the cost, marketing, and availability of medications. That thread is not handled particularly thoroughly, and it sort of falls by the wayside.