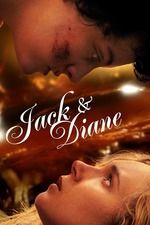 I wanted so badly to like this film. It has a lot going for it, starting with the presence of brilliant young actress Juno Temple (Diane). Diane and Jack (Elvis's granddaughter Riley Keough, playing way against type as she loses her supermodel looks to butch it up a bit) meet on a whim in NYC and start a relationship. The opening scenes are beautiful and a little heady, as if we've been allowed a peek inside Diane's unsettled mind.

The girls share a couple of genuine moments of young romance, awkward and gangly in their lack of understanding about their feelings. The atomic fireball scene stands out, giving us two young people dealing with adult feelings through a child's game.

So, you may well ask, if the performances are decent and the film looks good, then what's wrong? Plenty. First, these girls are not people. They're just bodies, physical beings to whom the plot happens. We don't get to know them at all, and there's no discernible reason for them to end up together after that first night.

Second, the plot moves soooooo sloooooooowly. I have watched some unengaging films, but it's been a long time since I checked my clock as often as in this one. All we get is a series of events with no sense of progression and certainly an unclear passage of time.

Finally, there's the werewolf bit. Disgusting, yes, but mostly just confusing. I could have done without the forced metaphor.

By the end, I was definitely ready for it to be over. But then we get that final scene. It's just a close-up of Diane as she listens to a song. Juno Temple is absolutely astonishing here, treading the line between laughing and crying, all the while struggling to breath properly. Her face stays almost completely still, and yet we can read every whooshing emotion churned up by the song.

Fidgeting through this film for almost two hours became worth it for that 60-second scene.