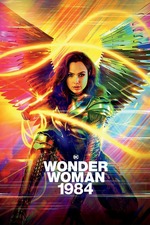 Absolutely stunned that a Gal Gadot blockbuster had the GALL to throw in a subplot about land being stolen in the Middle East under religious grounds but that part is glossed over so quickly it feels like you could read it as a pro-Zionist thing OR a pro-Palestinian thing. Either way, insane to write it in here! It's not really subtle!

Anyway– Chris Pine is hot! Good for him! I do not like the Snyderverse very much but I dug the production design of this movie as soon as we got outside of Themiscyra. There are three funny comedians in this film and they are given pretty much zero jokes, but there is one stand out piece of comedy here and it's the existence of a magazine called "Oil Economist Weekly." I dream of writing anything half as funny.