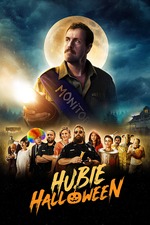 huge difference between making your movie a joke and making your movie a comedy and it feels like the writers, director, and actors all had different ideas of which they were doing that changed from scene to scene. pretty easy to do when you’re making a movie that weaves together like, twelve different plot lines in service of parodying like three movies. gotta admit i really enjoyed a gag every 15 minutes or so though! put betsy sodaro in more movies.

also good lord, how did that “large burning decoration on the lawn” scene make it through the production and past the edit. did no one behind the camera know any black people