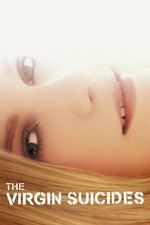 (Pinning this temporarily since it got buried quickly by non-reviews.)

Going in, I didn't really know anything about this other than Sofia Coppola and Kirsten Dunst were the principals, and I don't know what I was expecting, exactly, but I definitely was *not* expecting this to be as... horrifying... as it is. I mean the word "suicides" (plural) is right there in the title, so I'm just oblivious, but... yeah. This is a horror movie.

As it happens, I grew up next door to a family with five daughters, who were (are) good friends of mine, so this hit pretty damn close to home. Our families were (are) Catholic and we all had our tensions with our folks, but they weren't so psychotically overprotective as the Lisbon parents are here. But some of the other families we knew at Catholic school... the events here are disturbingly plausible.

(Aside: during my stint at the school, they implemented an abstinence-only sex ed program - and one father pulled his daughters out of the school, because even that was far too prurient in his eyes.)

Taking the film as a horror movie, it's worth interrogating who or what the 'monster' is. The obvious and immediate answer is 'the parents', but it's more than that - they are acting in what they believe to be the girls' best interests, and that determination of course derives from the way they themselves must have been raised, the culture of their youth and their contemporary peers. So it's something deeper and more pernicious. We see them both loosen and tighten their grip, trying to protect their daughters from the pain of real life - and they aren't even *wrong* exactly, what with Harnett's character being exactly the creep they anticipate a 'cool' high school boy to be. There's a "damned if you do, damned if you don't" quality to it, and it's worth wondering to what extent Dunst's character's self-destruction is a reaction to her parents being correct, in some sense, about how awful the outside world is (which is not in any way intended to justify them). She can stay inside and suffocate, or go out and be crushed - or she can destroy herself, and at least assert some agency over the inevitable. In that sense, then, the 'monster' is existence itself, the cruelty of life and the inexorable onset of death.

Another aside, one thing that strikes me about this movie, viewed for the first time in 2020 and the #MeToo era, is that the oppression is *not* particularly patriarchal, at least overtly. Mother Lisbon is at least as much an oppressor as the father is, and it's primarily female news reporters who ghoulishly descend on the girls like flies to create the salacious, manipulative local news bits intended to frighten parents and perpetuate that oppression (instead of, you know, helping the sufferers) - and, Hartnett's character aside, the boys in the film seem to be good enough eggs, and they are the ones that actually offer rescue (both metaphorical and literal). Of course, the mores and values the parents' oppression is designed to uphold have deeply patriarchal roots, so it *is* there, suffused throughout. But it's a much more nuanced and, in my opinion, therefore much more powerful depiction, than what one might imagine in a more strident modern telling of this same tale.