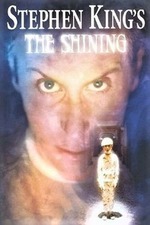 I had known that Stephen King's major issue with the Stanley Kubrick adaptation of this material is Jack Nicholson. King has publicly complained many times that Nicholson's Jack Torrance looks crazy from the very first scene he appears, so there's not much of a surprise when he does descend into madness by the end of the story. Which I can actually totally see and can agree with, Nicholson is a crazy actor, he was most likely hired because he can get to those insane places most of us can't. However, now I read the original novel and see this miniseries version (which HEAVILY underlines that Jack is an alcoholic and really isn't that far out of the woods from his last slip up) so actually the character Jack Torrance is already sick, and he's already got problems at the very start of the story... making Kubrick correct? In this version there's a lot of things like this specific instance that make you go, "okay sure, King is course correcting and adding in things that Kubrick cut from the film version" but in pretty much each case, I found that changing the specifics back to what was in the novel actually didn't help the story work any better.

I will say, this version is actually not as bad as I have been lead to believe, but it's definitely inferior compared to the Kubrick version (I mean honestly, how could an ABC made-for-TV miniseries possibly compete with a film from one of the greatest filmmakers who has ever lived?) This is just extra hard to watch because it's unnecessarily overlong and really suffers from '90s made-for-tv production standards.

Ironically I think this works well as a lesson in what not to do when adapting a book, but I think people will continue to seek this out (as long as its still available) out of curiosity. I mostly watched this because it was filmed at the Stanley Hotel, the real-life, haunted location that inspired King to write the story in the first place (and I'm going to visit that hotel for the first time, in just over a week from now!)