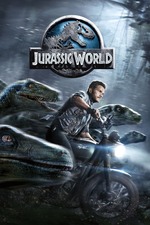 They did it. It's 2015 and there's a functional Jurassic Park with living dinosaurs as the prominent attraction. They now also train weaponised velociraptors and play God creating transgenic dinosaurs more deadly even than the tyrannosaur. This can only go well.

I'm not a Spielberg stan or anything, but the man possesses certain director qualities that are perfect for the Jurassic Park series that Colin Trevorrow simply doesn't, and one of those qualities is the ability to direct children. It's a Spielberg staple. Many of his most successful films feature great child acting performances, and it's an under-appreciated art form; having children play leading roles in films with an adult orientation (or at least not an exclusively kids to young adults target audience) is difficult, but the Jurassic Park films alway hit the mark, the first instalment especially. It's not the foremost reason I don't like Jurassic World, but it is the first. Gray and Zach could hardly be more bothersome. They don't have traits, they are a trait (singular), and annoying to boot.

John Williams' iconic sweeping score plays as the camera pans in on the island. At the dramatic crescendo what we see is... a theme park visitor center. That score that was once preserved for the awe and magic of cinema bringing dinosaurs to live, is now used aplenty to highlight the awe and magic of capitalist manifestations. It pains my fan heart to see it abused and misused like this; for Jurassic World to drive home its vulgarly hypocritical message. This is a movie that has the guts to poke fun at capitalism (the whole "Verizon Wireless presents the Indominus Rex"), while itself being an ultimate manifestation of said capitalism. It was literally the box office hit it was thanks to its name brand. It's literally full of glaring product placements. It literally throws two of the biggest stars in Hollywood at the time in the mix just to attract an ever larger audience. It's literally not about dinosaurs anymore, but about bigger, better, smarter (anthropomorphised) monsters.

It just goes to show how stupidly good this capitalist machine works, because I still kinda enjoyed myself watching this abomination (twice now). Feels like a hangover afterwards though.