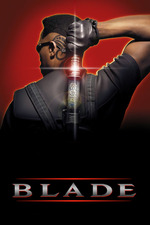 Blade is born a human-vampire hybrid with their strengths, but without their weaknesses. His mission? Kill all vampires. His next target: Deacon Frost, a young vampire rebel who wants to resurrect an ancient vampire god, and use its powers to destroy humankind.

This predating The Matrix changes my perception of the Wachowskis' film — it's 'unique' aesthetics specifically — a little, a little much.

Whose blood is he gonna drink if Frost succeeds in his plan to rid the world of humans?

Just because there's no longer an age difference doesn't make it any less weird for Blade's mother to get all sensual with him.

If Frost's girlfriend killing one of the twelve vampire elders before the ritual during which they'd be sacrificed to become La Magra even commenced, was their presence even necessary? Or did they have like... spares?

Of all the randomness, the mortally obese basement-dwelling vampire was surely the most random.