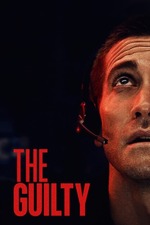 Jake Gyllenhaal acting like he’s coming from another world is always a pleasure to see, I’ll say that he’s my number one reason why I’ve enjoyed The Guilty, or it probably lies in the fact that I’ve never seen the original Danish film so it was fresh for me but one thing is sure; The Guilty was enthralling.

The Guilty is a small-scale thriller, everything happens at one location (or three locations, counting the bathroom and that lovely toilet 😊) so I was sold knowing this in advance, I’m always in for those type of thriller, it kind of reminds me of The Call (2013) with Halle Berry, I would say that I prefer the former because of its higher intensity and the twists-and-turns.

Probably unpopular opinion here but I really loved these 911 Operator movies, I wish they would make more of them, I really like that specific sub-genre for some odd reason. Doing a movie solely based on back-and-forth conversation and ringtone that goes on and off constantly could become tedious if you are not in the mood, I can see people finding the movie dragging in the last 25 minutes or so due to the fact that once everything is ‘reveal’, you feel just hanging there waiting and watching Gylenhaal overdramatize for the rest of the film.

But I think The Guilty is worth the detour, the premise is simplistic, it gives the minimum amount of thrills and engagement necessary with the best male performance in the leading-role of 2021 so far, so I’ll go with a yes, and besides, watching Jake Gylenhaal not giving a fuck about someone who broke his knee was the pinnacle of comedy, I got a good laugh out of it.

Anyway, I hope Joe did get a beer with his colleague..poor guy, probably still waiting at the bar! 🥺