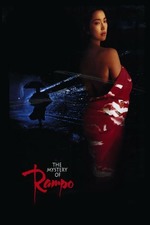 The filmmakers have invented an incident in the life of the Japanese author of mystery and the macabre Edogawa Rampo (Naoto Takenaka). He learns of a woman (Michiko Hada) whose husband has died under circumstances identical to those in a novel of his that has just been banned by the government. He is driven to seek her out and she becomes a kind of muse for him. The film becomes a surreal mix of fantasy and reality.

Unfortunately, it turns out to be a mess. There is some interesting stuff early on, and I feel that there was the potential for a decent film here, but the director simply didn't know what he was doing. Perhaps part of the problem was that producer Kazuyoshi Okuyama seized it from the original director and reshot more than 60% of it. I really wanted to like it and was waiting for the fantasy and real-life tracks of the story to culminate in some kind of coherent resolution. Instead, it collapses into a pointless, ridiculous montage of breaking glass, firecrackers, and other meaningless images. Okuyama is an incompetent director. I give it two stars because I'm a nice guy.