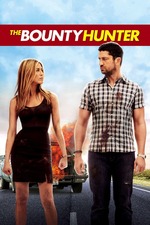 The bounty hunter was released in 2010 and was directed by Andy Tennent. The movie stars Gerrard Butler, Jennifer Anniston, Jason Sudeikis and many more.

The action romance movie is all about a bounty hunter been given a job to retrieve his crazy ex wife. The job however becomes tough when the Ex wife escapes and chases a lead, therefore causing both the bounty hunter and ex-wife on an escape for their lives.

This movie has great leads with Jennifer Anniston and Gerard Butler, both giving great compelling performances. The best parts of the movie for me is when both Jennifer and Gerard are in scenes together. This is when the movie has some good comedy, and some nice romance scenes as they have good chemistry together.

The action in the movie is pretty poor if I am honest and I kind of loose interest at those stages, the movie goes off on abit of a tangent as they are being chased by some criminal, which links back to Gerard’s job as a former cop.

Overall I’d rate this movie a 3 and a 1/2 ⭐️ I enjoyed the main story line with these 2 actors however felt like the action lost my interest and some of the side characters aren’t great, more annoying than humorous. I would recommend this movie for a fun watch, with some light entertainment.